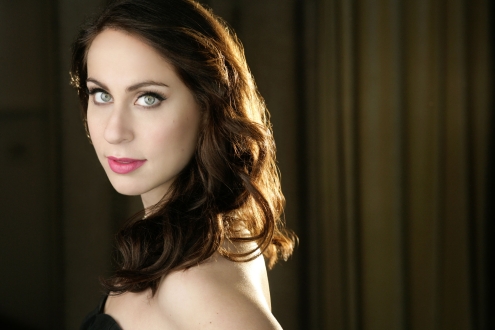 Elizabeth Sutphen, who studied at the renowned Juilliard School in New York, is back in Frankfurt, where she was a member of the Opera Studio from 2016 – 2018, where she recently sang Oriana in the second run of our new production of Amadigi in the Bockenheimer Depot, and can now be seen and heard as the Wife (role debut)  in Schönberg's Von Heute auf Morgen (From Today till Tomorrow) – part of a new triple bill titled Waiting for Today. Recent roles with which this American soprano has thrilled audiences in Frankfurt have included Lisa (La sonnambula), Papagena (Die Zauberflöte), Romilda (Xerxes), the Blessed Virgin (Jeanne d’Arc au bûcher) and Tiny (Britten's Paul Bunyan). This season she makes her debuts at the Bayerische Staatsoper in Munich, as Blonde (Die Entführung aus dem Serail), Palm Beach Opera, as Valencienne (The Merry Widow) and Atlanta Opera, as Chrisann Brennan in Mason Bates’ and Mark Campbell's The (R)evolution of Steve Jobs. She returned to Frankfurt last season for Atalanta (Xerxes) and in 2019/20 for Lisetta (in a new production of La gazzetta) and sang Gilda (Rigoletto) at Houston Grand Opera, where she made her debut in the world premiere of Tarik O’Regan's The Phoenix . She returned to Frankfurt in 2018 for Zerbinetta, a role she sang at Kentucky Opera in 2017, and sang her first Sophies in Der Rosenkavalier at the Glyndebourne Festival. Other engagements have included Bianca (La rondine) at the Opera Theatre of Saint Louis, the Queen of the Night (Die Zauberflöte) with the Albany Symphony and Frasquita (Carmen) at Aspen Opera. Concert work has included appearances with the Orchestre National de Lille and Los Angeles Chamber Orchestra.