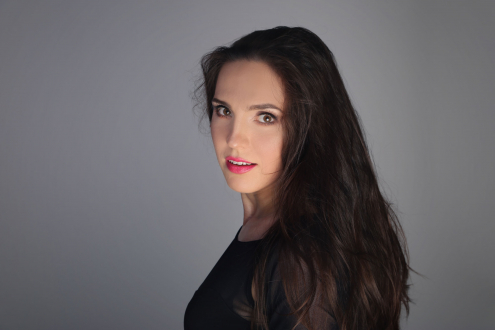 The Russian soprano Olesya Golovneva is back at Oper Frankfurt, where she sang for the first time in 2015, in the title role in Rusalka, which was followed by Mimì (La Bohème) and Desdemona (Verdi‘s Otello), to sing Elisabeth de Valois in Don Carlo. She has appeared at theatres including the Staatstheater in Wiesbaden as Desdemona (Otello), Tatiana (Eugene Onegin) and Vitellia (La clemenza di Tito), the Deutsche Oper am Rhein as Maria Stuarda, Violetta (La traviata), Elisabetta (Don Carlo) and Donna Anna (Don Giovanni) and Cologne Opera as Vitellia, Lucia di Lammermoor, Anna Bolena, Violetta (La traviata), Natascha (Prokofiev‘s Krieg und Frieden / War and Peace) and Rusalka. Other recent highlights have included Valentine (Les Huguenots) with Juan Diego Florez at the Deutsche Oper Berlin, Gilda (Rigoletto) at Zurich Opera, Tatiana at the National Opera in Helsinki and Tchaikovsky‘s Iolanta (in concert) at the Philharmonie in Cologne and Konzerthaus in Berlin. Future engagements this season include her return to Berlin and Helsinki for Valentine and Tatiana. Concert work has taken her to venues including the Berlin and Dresden philharmonies, the Athens Concert Hall and the Musikverein in Vienna. Her discography includes recordings of Iolanta under Dmitri Kitajenko and DVDs of Luisa Miller and La Bohème at Malmö Opera.