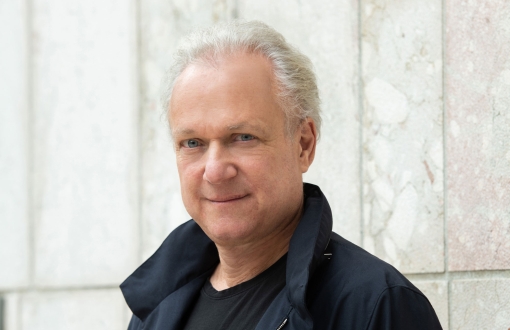 Internationally sought-after baritone Johannes Martin Kränzle was awarded the Deutsche Bühnenverein's 2019 DER FAUST theatre prize for »Best Singer« for his interpretation of Šiškov in From the House of the Dead at Oper Frankfurt. This former member of the Ensemble is back to sing Danilo in this revival of The Merry Widow and Frank Martin's Six Monologues from „Jedermann“ - part of a new triple bill called Waiting for Today. His most recent role for the house was the Music Teacher in Ariadne auf Naxos. This 2011 and 2018 »Singer of the Year« (Opernwelt), with an astonishing 125 roles under his belt, has appeared at renowned theatres and festivals around the world. He was invited to perform his party piece, Sixtus Beckmesser (Die Meistersinger von Nürnberg), again at the Metropolitan Opera in New York this October/November,  a role he enjoyed a triumph with three years running at the Bayreuth Festival, the Staatsoper Berlin and Covent Garden in London, where he also sang Alberich in Wagner's Ring in 2018. Future plans include the Music Teacher in Ariadne auf Naxos at the Met in New York in 2021/22 and Faninal (Der Rosenkavalier) at the Bayerische Staatsoper in Munich. His discography includes live OehmsClassics recordings of Frankfurt productions of Reimann's Lear (Gloster), Pfitzner's Palestrina (Morone) and Götterdämmerung (Gunther) and solo albums with the pianist Hilko Dumno: Grenzen der Menschheit / Limits of Humanity, Die Mitternacht zog näher schon / Midnight was drawing Closer and Das ewige Rätsel / The Eternal Mystery (awarded the 2018 Deutsche Recording Critic's prize). Johannes Martin Kränzle has been teaching for many years, holding masterclasses and guest professorships at the University for Music and Dance in Cologne and University of Rio Grande do Norte in Natal, Brazil.

To find out more about him go to his Homepage.