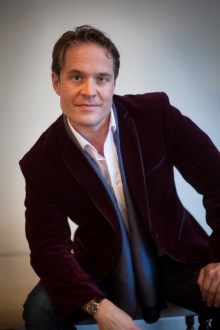 Lawrence Zazzo, one of the most electrifying countertenors in the world, is back at Oper Frankfurt, where he recently sang Arsamene in Handel’s Xerxes, to repeat his unforgettable portrayal of the title role in Tamerlano. He gave a recital here in 2017 and sang Ottone in Agrippina and Odysseus in the world premiere of Rolf Riehm’s Sirenen / Sirens. This American artist is much in demand and appears regularly at leading theatres and festivals around the world including the Glyndebourne, Aix-en-Provence and Edinburgh festivals, the Hamburg, Munich, Berlin and Vienna state operas, Zurich Opera, the Théâtre Royal de la Monnaie in Brussels, Théâtre des Champs-Elysées and Opéra national de Paris, the ROH Covent Garden in London and Metropolitan Opera in New York. This singer, and musicologist’s recent engagements have included Bertarido (Rodelinda) at the Opéra de Lyon, Oberon (A Midsummer Night’s Dream) at the Vienna State Opera, David (Saul) at the Festival International d’Opéra Baroque de Beaune and Handel’s Giulio Cesare at the Semperoper in Dresden. Operas in concert have included San Giovanni Battista at the Festwochen for Early Music in Innsbruck, Giulio Cesare in Egitto at the Theater an der Wien and he sang in Bach’s St. Matthew Passion in the Concertgebouw and Solomon at the Royal Opera House. Lawrence Zazzo‘s repertoire also includes 20th century music and roles including Mascha (Eötvös’ Tri sestry / Three Sisters), Trinculo (Ades’ The Tempest) and a Refugee (Dove’s Flight).