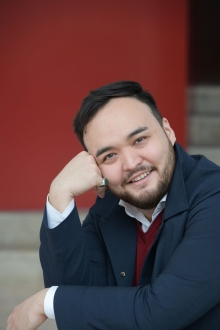 Kazakhstan born tenor Kudaibergen Abildin made his debut at Oper Frankfurt  in the summer of 2022 singing Rinuccio in Gianni Schicchi. He joins our Ensemble in 2022/23 during which you can hear him as Tamino and Lukasch in new productions of Die Zauberflöte and Tchaikovsky’s Die Zauberin/The Enchantress and Lenski in Eugene Onegin. He studied at the College of Arts in Karaganda before going to the Kazakh National University of Arts in Astana and then the Conservatoire in Maastricht for his masters in 2018. He then graduated from the Mozarteum University in Salzburg. His repertoire includes Nemorino (L’elisir d’amore), Camille de Rosillon (Die lustige Witwe / The Merry Widow), Rodolfo (La Bohème) and Alfredo (La traviata). This winner of many international singing competitions recently received the Eva Randová Award and diplomas at the Rita Gorr Competition in Ghent and Elena Obraztsova Competition in St. Petersburg. He has taken part in masterclasses held by people including Sergei Leiferkus, Pyotr Dvorsky, Eva Randova, Larissa Diadkova, Tatiana Smelekova and Barbara Haveman and appeared in concert in the land of his birth, the Netherlands, Czechoslovakia, Belgium and Russia.