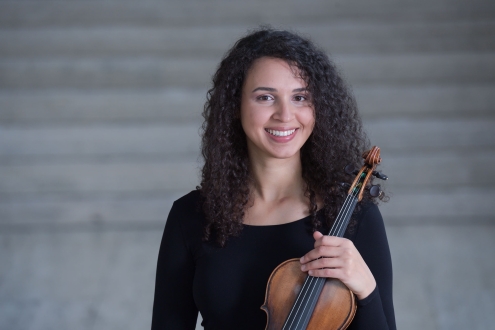 Aischa Gündisch was born in Tübingen and studied at the Royal College of Music in London with Prof. Detlef Hahn, Bard College Conservatory of Music/USA with Prof. Shmuel Ashkenasi, the Mozarteum in Salzburg with Prof. Harald Herzl and Stuttgart University of Music with Prof. Anke Dill. She also took part in masterclasses held by people including Donald Weilerstein, Arnold Steinhardt, Igor Ozim, Mi-Kyung Lee and Ivry Gitlis. She played in the first violins of the Orchester Musikkollegium Winterthur in Switzerland from 2016 - 2021. She also gained experience playing with other respected orchestras including the National Youth Orchestra and as a member of the Bamberg Symphony's academy, the Royal Concertgebouw Orchestra, Tonhalle Orchester Zürich, London Symphony Orchestra, Zurich Camerata and the Royal Northern Sinfonia. She is also a member of the Chineke! Orchester, whose musicians are mainly black or from enthnic minorities, which strives for more diversity in classical music. Aischa Gündisch won a scholarship from DAAD and was sponsored by Cusanuswerk. She has also performed all sorts of chamber music in places including the Ludwigsburg Castle Festival, the Heinrich Heine Haus in Paris, the Biennale in Bamberg, the Chamber Music Society of Reading/Pennsylvania, and the Carnegie Hall in New York. Aischa Gündisch joined the Frankfurt Opern- und Museumsorchester in the 2021/22 season as assistant deputy of the second violins.