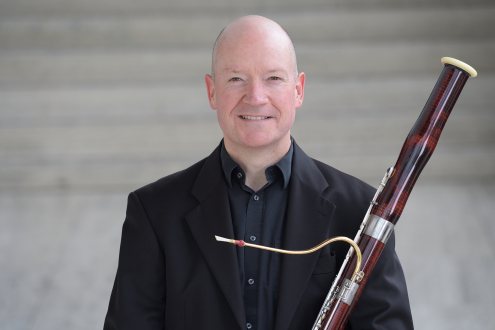 Richard Morschel was born in Johannesburg, South Africa. Classical music was part of his life from an early age because his parents were orchestral musicians. It was the bassoon which fascinated him most, so his father gave him his first lesson. He began studying with Prof. Karl-Otto Hartmann at the University for Music in Freiburg in 1987 before being appointed deputy solo bassoonist at the Frankfurt Opern- und Museumsorchester in 1991. Chamber music was always closest to his heart: Richard Morschel has performed with various ensembles with whom he has gone on tour throughout the world. His busy concert career has taken him leading concert halls including the Royal Albert Hall and Concertgebouw, he has also appeared on recordings with the SWF (Sudwestfunk) and BR(Bavarian Radio) symphony orchestras and CDs with the Hindemith Quintet and Pleyel Trio. One of his most memorable musical experiences was playing with William Bennett in Freiburg. Richard Morschel has been a member of the Frankfurt Opern- und Museumsorchester for nearly 30 years. He has two sons, who love music, and is a proud grandfather. His life's motto: »Treat others as you would you like to be treated yourself, and always be grateful.« Richard Morschel is a leading pastor of an international free Evangelical church (Kingdom Life Frankfurt).