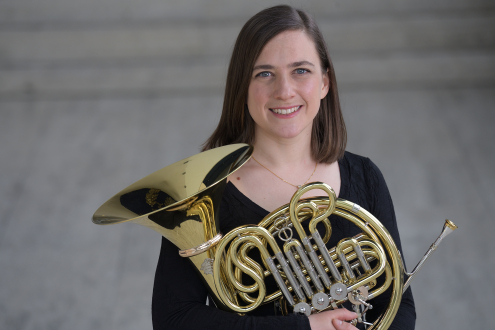 Genevieve Clifford comes from Melbourne, Australia. She started piano and cello lessons when she was 5 and playing the horn when she was 9. After studying at the Australian National Academy of Music with various professors (including Barry Tuckwell) she decided to move to Germany, continuing her studies at the University for the Arts in Berlin with Prof. Christian Dallmann (2008-2011). After appearing with orchestras in Australia, New Zealand and Germany Genevieve Clifford was given a temporary contract for the 2009/10 season with the Rundfunk Sinfonieorchester Berlin (RSB). This was followed by a full-time contract for 2010/11 with the Essen Philharmonic. She has been a member of the Frankfurt Opern- und Museumsorchester since 2016/17. She plays regularly with various international orchestras, including the Mahler Chamber Orchestra and Australian World Orchestra. She also teaches at the University for Music in Freiburg. Genevieve Clifford loves playing music by Mozart most of all, is a passionate reader and loves walking in the countryside and up and down mountains. She is also an amateur goldsmith.