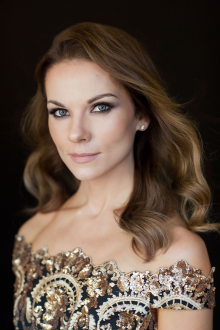 The Polish mezzo-soprano Joanna Motulewicz is back in Frankfurt, where she made her debut in 2015 as Bronka in Weinberg’s Die Passagierin / The (female) Passenger (going on tour with the company to the 2016 Vienna Festwochen), which was followed by La badessa (Suor Angelica), Ciesca (Gianni Schicchi) and the Forester’s Wife/Owl (Das schlaue Füchslein / The Cunning Little Vixen - available on CD - OehmsClassics), to sing Euryclea in this new production of Fauré’s only opera - Pénélope, a role she sings later this season at Oper Graz. Joanna Motulewicz has been under contract to the Podlachisian Opera in Białystok (Poland) since 2012, where roles have included Mirabella (Der Zigeunerbaron / The Gypsy Baron) Carmen, Prince Orlowsky (Die Fledermaus), Flora (La traviata) and 3rd Lady (Die Zauberflöte). Roles for Teatr Wielki in Warsaw, where she was a member of the Opera Academy, have included Larina (Eugene Onegin), Mércèdes (Carmen) and Marta (Moniuszko‘s The Haunted Manor). Other engagements undertaken by this graduate from the Fryderyk Chopin Music University and prize winner at many competitions have included Selinda (Vivaldi‘s Farnace) and Bradamante (Alcina) at the Baroque Festival Dramma per Musica in Warsaw, Fenena (Nabucco) with Opera Classica Europa and the conductor Hans Richter and Mahler‘s Kindertotenlieder with the Orquesta Sinfonica Conjunta under Juan García Rodríguez in Seville. She works regularly with the La Tempesta Ensemble for Early Music under Jakub Burzyński.