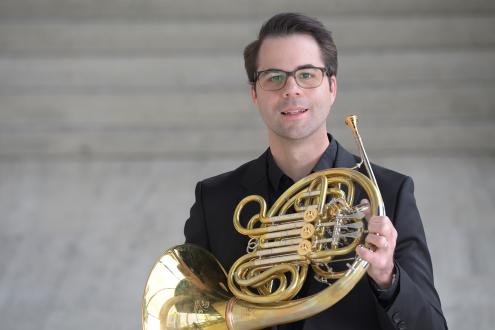 Claude Tremuth was born in Luxemburg. He spent the first years of his musical training at the Conservatoir in Esch, Alzette, before taking up the horn with Prof. Christian Lampert at the Music Academy in Basel and then the University for Music in Stuttgart. After four terms he was offered an apprenticeship by the Dortmund Philharmonic and Essen Philharmonic and joined renowned youth orchestras including the European Union Youth Orchestra, the Schleswig-Holstein Music Festival's Orchester Academy and the Gustav Mahler Youth Orchestra. Claude Tremuth went under temporary contract to the Frankfurt Opern- und Museumsorchester in 2011 and was then offered a fixed post with the Staatsorchester in Hannover. He has been a member of the Frankfurt Museumsorchester since 2015. Many temporary jobs with famous orchestras helped broaden his musical horizon even further. He has appeared as a soloist with the Sinfonieorchester Basel and Basel Festival Orchester.