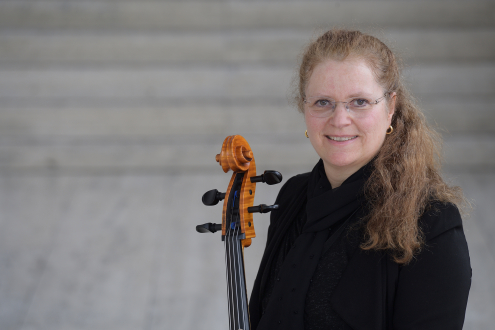 Sabine Krams was born in Frankfurt and studied the cello in Freiburg with Prof. Christoph Henkel before winning a DAAD scholarship in 1985 to study in Bloomington, USA, and study with Prof. János Starker. She took up her studies again with Prof. Friedrich-Jürgen Sellheim in 1987 in Hannover (soloist exam 1990). She won prizes at Jugend musiziert, the Domnick and Gedok competitions and the BDI Cello Competition. She spent two years as first solo cellist of the Staatsorchester in Braunschweig and has held the post of deputy solo cellist at the Frankfurt Opern- und Museumsorchester since 1989. She has worked as a solist, as a member of Frankfurt's DKO, at home and abroad (Japan, South Korea and Europe). She is half of Duo ABassionato, a member of Ensemble Mundanus, the Mahagonny Cello Quartet (the Frankfurt Opern- und Museumsorchester's quartet) and performs regularly in all sorts of chamber music combinations. She teaches the cello and orchestral studies at the University for Music and the Performing Arts in Frankfurt. She has been performing solo concerts for some time, during which she recites poetry and plays the cello.