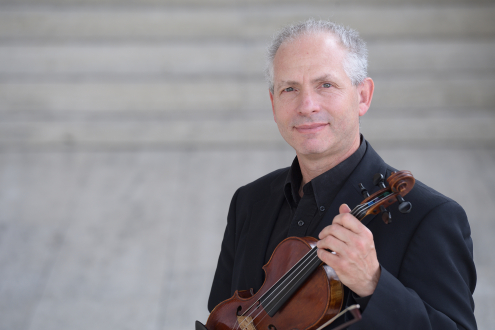 Sergio Katz was born in Rio de Janeiro and took up the violin at the age of eight, with Alberto Jafé and Frederik Stephany. He won many prizes at competitions and a DAAD scholarship in 1979 before studying at the University for Music in Detmold with Professor Lukas David. Whilst still a student he joined various music courses run by people including Tibor Varga, Ruggero Ricci, Pjotr Bondarenko. He has appeared as a soloist in many countries and in various chamber music combinations. After a short time spent as principal second violin in the Tempo giusto chamber music orchestra in Bern he joined the first violins in the Frankfurt Opern- und Museumsorchester in 1987. He has played regularly with the Bamberg Symphony Orchestra, the hr(Hessen Radio) Symphony Orchestra and WDR Symphony Orchestra for more than 30 years.