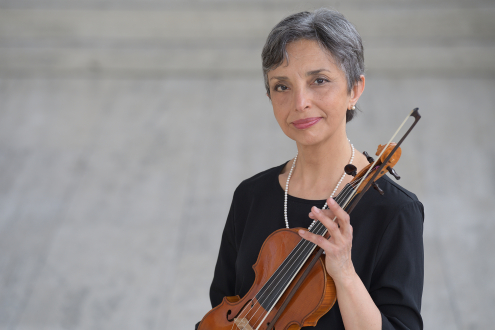 Basma Abdel-Rahim comes from a musical family in Cairo, where she was given her first violin lesson at the Conservatoire when she was six, and graduated with distinction in 1982. She went on to study in Frankfurt am Main, where she received a DAAD scholarship in 1984 and her diploma in 1987, after which she joined the Frankfurt Opern- und Museumsorchester. A Fulbright scholarship enabled her to further her studies in Bloomington / Indiana in 1991, a time when she realised a love for baroque music with the Early Music Institute. She studied early music at the Schola Cantorum in Basel from 1994 - 1996. She joined the Balthasar Neumann Ensemble in 1998 and founded, with her husband Kaamel Salaheldin, the Horus Ensemble in 2002, which specialises in early music. Work as a soloist and chamber musician, on recordings for radio and television (including works dedicated to her by her father Gamal Abdel-Rahim) have taken her through Europe, North America and the near East. Basma Abdel-Rahim started running various projects for young musicians in 2005 and collaborates with the junior school »Ohrwurm / Tunes you just can't get out of your brain!« project. She began workshops in how to play in true early music style at the Cairo Conservatoire in 2019.