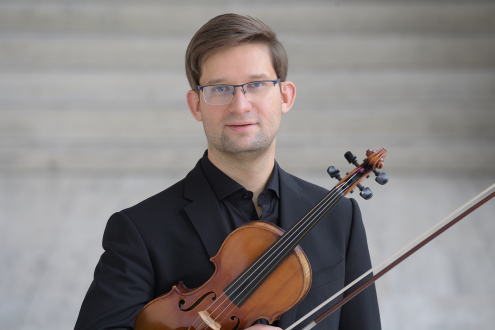 Arseni Kulakov Tarasov studied at the University of Music in Mannheim with Abraham Jaffé and Sergei Fatkulin and the Chicago College of Performing Arts and University for Music in Munich with Roman Nodel, Vadim Gluzman and Mi-kyung Lee and Ulf Wallin. This was followed by masterclasses held by Ivry Gitlis, Ana Chumachenco, Gil Shaham, Jean-Jacques Kantorow, Thomas Brandis, Kolja Blacher and Donald Weilerstein. He won first prize and various sponsorship prizes at international competitions (including the Villa de Llanes competition, the Concurso Joaquín Maya, and German National Youth competition) and special prizes from the German Musikleben Foundation and Carl Flesch Academy. Arseni Kulakov Tarasov has appeared in concert in Europe, Russia and the USA, as a soloist with many leading orchestras, including the Philharmonie Baden-Baden and Szolnok Symphony, and performed in various chamber music formations with musicians including Markus Bellheim, Hariolf Schlichtig, Ingolf Turban, Markus Wolf and Wen-Sinn Yang. He played tutti first violin with the Bayerische Staatsorchester, then deputy first violin at the Staatstheater in Darmstadt before taking up the same position with the Frankfurt Opern- und Museumsorchester in 2019. Getting to know and working with Ivry Gitlis made a big impact on Arseni Kulakov Tarasov's life. In his free time he likes taking photographs of landscapes and stars, finding out more about scientific research and discoveries and their effects on mankind and nature, spending time with family and friends over a good meal.