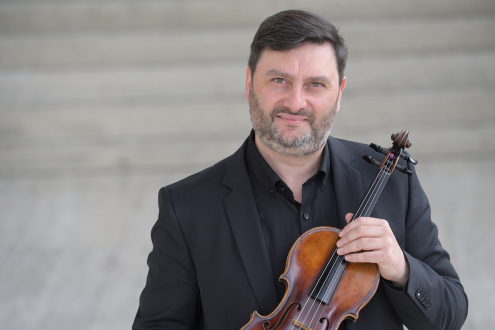 Artur Podlesniy was born in Kharkiv/Ukraine in 1980. He studied at the Gnessin Music Academy in Moscow and Robert Schumann University in Düsseldorf (with Rosa Fain), graduating, with distinction, in 2006. He has won many prizes in competitions including the Vladigerov Violin Competition Shumen / Bulgarien and Schostakovitch Competition in Moscow. He also won a DAAD prize. He appears regularly as a soloist and chamber musician in the Ukraine and other European countries. He is a member of the HABA Quartet in Frankfurt am Main. His career as an orchestral musician began in 2002 gaining experience with the Düsseldorf Symphony Orchestra. He performed with the Aalto-Theater / Essen Philharmonic's Orchester Academy in 2003 before joining the orchestra. He joined the first violins of the hr (Hessen Radio)-Sinfonieorchester in 2008. He has been Deputy First Concert Master of the Frankfurt Opern- und Museumsorchester since 2016/17.