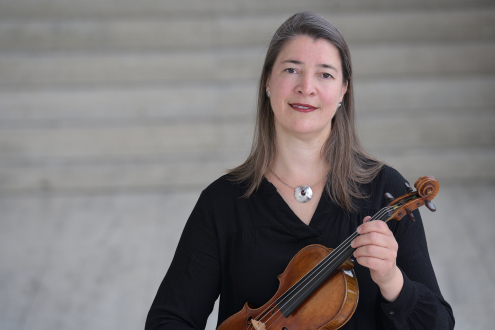 Gesine Kalbhenn-Rzepka began playing the violin at the age five, and soon started making music with various ensembles. She studied with Prof. Heinz Rudolf in Dresden and graduated with distinction before joining Prof. Thomas Brandi's masterclasses in Berlin, where she became his assistant and passed numerous other exams. This was followed by a chamber music course with the Alban Berg Quartet. During her time as a Concert Master of the EUYO and deputy leader of the Staatskapelle in Dresden she gained invaluable experience working with conductors including Sir Colin Davis, Carlo Maria Giulini and Bernhard Haitink. She was appointed deputy Concert Master at the Staatstheater in Darmstadt in 2000, a position she has held at the Frankfurt Opern- und Museumsorchester since 2005. She was invited to join the Beaux Arts Trio for chamber music concerts. She is much sought-after as a soloist and guest Concert Master, for early and contemporary music, appearing with orchestras including the Balthasar Neumann Ensemble under Thomas Hengelbrock, the Staatsoper Berlin, Munich Philharmonic and the WDR Symphony Orchestra.