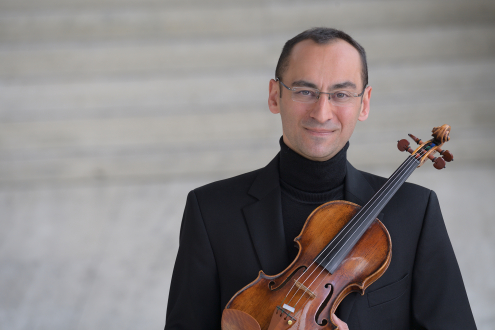 Dimiter Ivanov has been First Concert Master of the Frankfurt Opern- und Museumsorchester since 2008. He held the same position with the Orchestra del Teatro Lirico di Cagliari in Sardinia (2005 – 2008). He began playing the violin when he was eight and taught, later on, by Georgi Tilev in Würzburg. He then studied with Grigori Zhislin (Würzburg), Miriam Fried (Bloomington/USA) and Ulf Wallin (Berlin). He was sponsored by the Geman People's Study Foundation, Musikleben foundation and enjoyed success at many international competitions. Work as a soloist has taken him to orchestras including the Konzerthausorchester Berlin, the Frankfurt Opern- und Museumsorchester, the Radio Symphony Orchestra Krakow, Würzburg Philharmonic Orchestra, the Orchestra del Teatro Lirico di Cagliari, Sofia Philharmonic Orchestra and the Philharmonie Südwestfalen. He taught at the Hanns Eisler University for Music in Berlin from 2010 – 2014. Dimiter Ivanov co-founded the Limes Trio in 2015 and is a regular guest at leading music festivals.