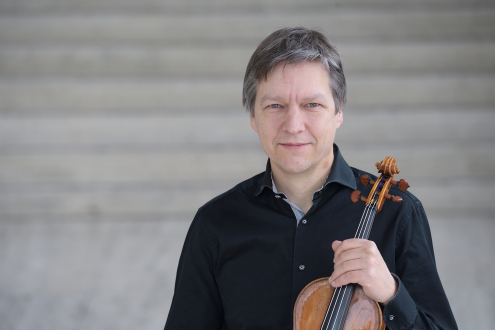 Frankfurt am Main started playing an important part in Ingo de Haas' life when he was 10, when one of the best violin teachers, Karl-Albrecht Herrmann, took him on as his youngest pupil. He then studied with Ulf Hoelscher in Karlsruhe. He received a scholarship from the Richard Wagner Stiftung, sponsorship from the European Economy and a DAAD scholarship to study in London for a year. He was appointed First Concert Master at the Staatstheater in Darmstadt at 25, moving to the same position with the Frankfurt Opern- und Museumsorchester in 1999. He teaches at the University for Music and the Performing Arts in Frankfurt. He has appeared as a soloist with many orchestras, and played the Berg and Dvořák concertos in Museumsconcerts in the Alte Oper, Frankfurt. His broad and extensive repertoire includes seldom performed works such as Erich Wolfgang Korngold, Igor Stravinsky and Philip Glass' violin concertos. He is passionate about chamber music and leader of the Hindemith Quartet.