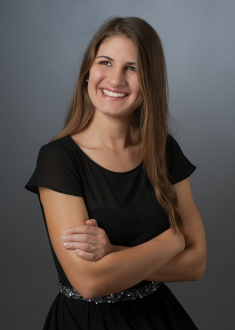 Chiara Bäuml joined Oper Frankfurt’s childrens‘ chorus when she was ten, and had her first singing lesson two years later with Laurie Reviol, when she made her debut as a daughter in Humperdinck‘s Königskinder at Oper Frankfurt. This was followed in later years by the 1st Boy in Die Zauberflöte, Vreli as a child in Delius‘ Romeo und Julia auf dem Dorfe / A Village Romeo and Juliet and the Messiah and a Slave in Salome. She won a prize at the 2014 National Singing Competition and is currently completing her singing studies at the University for Music and the Performing Arts in Frankfurt.