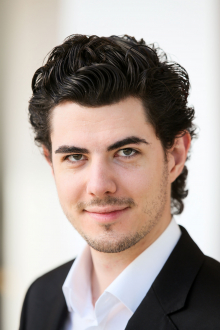 The German-American bass-baritone Gabriel Rollinson joined the Opera Studio in Frankfurt last season and can be heard during the 2021/22 season in roles including Zuniga (Carmen), Borow in the first performances in Frankfurt of Giordano's Fedora and Snug in a new production of Britten's A Midsummer Night's Dream. He sang Arturo Cidre in the world premiere of Micha Hamel's Caruso a Cuba at Dutch National Opera in Amsterdam and Don Alfonso (Così fan tutte) in the Prinzregententheater in Munich, where he returned to sing Bottom in Britten's A Midsummer Night’s Dream, and Leone  in Verdi's Attila with the Munich Radio Orchestra under Ivan Repušić. Whille a member of the Salzburg Festival's Young Singers' Project he recently took part in an opera for children: The Star that Couldn't Shine. His repertoire includes the Speaker (Die Zauberflöte), Sacerdote (Scarlatti's La Giuditta), Dottore (La traviata), Samuel (Un ballo in maschera), the Traveller (The Perfect Fool), Rocco (Fidelio) and Presto (Les Mamelles de Tirésias). Concert work has taken him to places including the George Enescu Festival in Bucharest, the Schumann Gesellschaft in Frankfurt, Weilburg Castle concerts, Eppan Liedsommer, Bodensee Festival and the Kennedy Center in Washington. He has worked with conductors including Lothar Zagrosek, Jonathan Brandani, Nicholas Cleobury, Otto Tausk, Clemens Schuldt and Marcus Bosch. Gabriel Rollinson studied at the Manhattan School of Music and University for Music and Theatre and August Everding Theatre Academy in Munich. He has taken part in masterclasses held by Brigitte Fassbaender, Thomas Hampson, Thomas Quasthoff, Jonas Kaufmann and Hartmut Höll, with whom he recently appeared in recital in the Streingräber Chamber Music Hall in Bayreuth. In 2019 he was awarded a scholarship by the Munich Richard Wagner Verband, the Heidelberg Spring Lieder Academy and reached the finals of the Bertelsmann Stiftung's International Neue Stimmen Competition in Gütersloh.