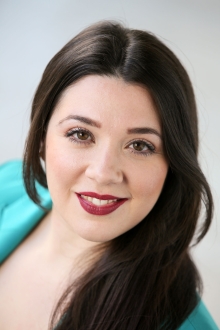 The Maltese mezzo-soprano Marvic Monreal is now in her second season as a member of the Opera Studio, during which you can hear her as Martha (Iolanta) Lucia (La gazza ladra) the Deaconess (King Roger), La maestra della novizie (Il trittico) and 1st Maid in a new production of Dallapiccola's Ulisse. She studied at the Royal Academy of Music in London, where she sang roles including a Flower Maiden (Parsifal), Ramiro (La finta giardiniera), Minskwoman (Jonathan Dove's Flight), Lucretia (The Rape of Lucretia), Goffredo (Rinaldo) and in Cavalli's L’Egisto. While she was a Jerwood Young Artist she sang in the chorus at the 2016 Glyndebourne Festival in Die Meistersinger von Nürnberg, Le nozze di Figaro and Béatrice et Bénedict and covered the roles of the Dog and Hippolyta in The Cunning Little Vixen and A Midsummer Night’s Dream. Recent projects have included Dido (Purcell's Dido and Aeneas) at Teatru Manoel in Valletta, Marthe (Faust) at Winterbourne Opera in Salisbury and Bradamante (Alcina) and Vénus (Orphée aux enfers) at the Royal Academy Opera. Recent concert work has included Beethoven 9 in Malta and Mahler 2 in the Royal Festival Hall in London. She was a member of the 2017 Salzburg Festival's Young Singer’s Project, where she sang Pisana in I due foscari, joined the National Opera Studio in London for the 2018/19 season and took part in the 2018 Georg Solti Accademia. She won the Edna Bradford, AM Parker and Esther Hulbert prizes, the Isabel Jay Singing Competition and was awarded scholarships by the Fordyce, Malta Arts and Drake Calleja Trust foundations, the BOV Joseph Calleja Foundation and Jonathan Stubbs Foundation.