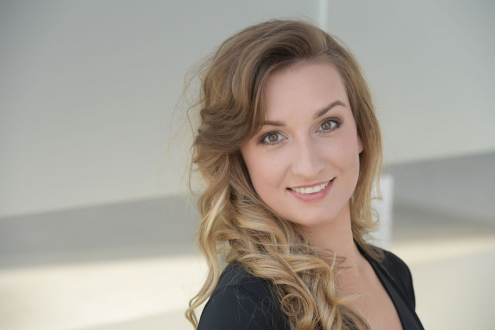 Polish born soprano Monika Buczkowska made her debut in Germany at Oper Frankfurt in 2019/20, singing Lydie in a new production of Fauré's Pénélope, and joined the ensemble in 2020/21, during which she sang in staged performances of Pergolesi's Stabat mater.  Her roles this season are Leonora and Helena in new productions of Nielsen's Masquerade and Britten's A Midsummer Night's Dream, Fiordiligi in Così fan tutte, and Suor Genovieffa in Suor Angelica and Nella in Gianni Schicchi - Puccini's Il trittico. During the 2022/23 season you can hear her as 1st Lady, Dorinda and a Maid in new productions of Die Zauberflöte, Orlando and Elektra and Gretel in Hänsel und Gretel. Before coming to Frankfurt she was a member of the Teatr Wielki in Warsaw's Young Talents Development Programme (Opera Academy), where she sang Zerlina (Don Giovanni), Susanna (Le nozze di Figaro) and repeated her portrayal of Papagena in Barrie Kosky's Die Zauberflöte in 2020. She enjoyed huge success singing Madeleine in a new production of Adolphe Adam's Le postillon de Lonjumeau last winter at the Tirol Festival in Erl, where she sang Freia in a new Das Rheingold in the summer of 2021. She also took part in a new production of Prokofiev's Fiery Angel under Kazushi Ōno at the Teatr Wiekli - a co-production with the Festival d'Aix en Provence, Eurydike (Orpheus in the Underworld) at Baltic Opera in Gedańsk, Pamina at the Music Theater in Lüben and Kryzsztof Penderecki's Credo in Nagoya. She graduated from the Ignacy Jan Paderewski Music Academy in Posen and prizes have included 1st prize at the Polish Vocal Festival Maria Stankowa in Olsztyn and the Marta Eggerth & Jan Kiepura Prize at the 10th International Stanisław Moniuszko Vocal Competition.