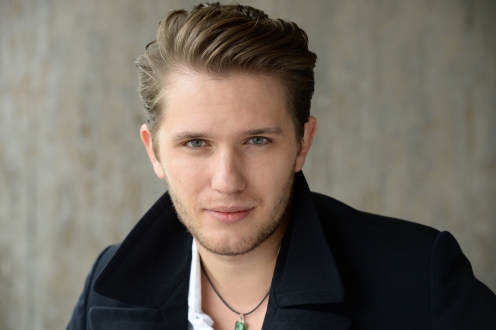 Since leaving our opera studio to join the ensemble in 2014/15, this young Ukrainian baritone has enjoyed great success with roles including Papageno (Die Zauberflöte), Almaviva (Le nozze di Figaro), Dandini (La Cenerentola), Sir Riccardo Forth (I puritani), Enrico Ashton (Lucia di Lammermoor), Lescaut (Manon Lescaut), Marcello (La Bohème) and the title roles in Don Giovanni and Eugene Onegin. During the 2021/22 season he can be heard as Milord Aresping in a new production of Cimarosa's L'italiana in Londra, Moralès / Dancaïro in Carmen and repeat his wonderful portrayals of Graf Danilo and Guglielmo in The Merry Widow and Così fan tutte. Forthcoming plans include his debut at the Metropolitan Opera in New York, singing Schaunard in La Bohème.  He appeared at the Rossini Opera Festival in Pesaro for the first time in 2020, as Slook in La cambiale di matrimonio and Figaro (role debut) in Il barbiere di Siviglia. This was preceded by his debuts at the Théâtre Royal de la Monnaie in Brussels, in Don Giovanni and Così fan tutte, and in the USA, as Eugene Onegin at Michigan Opera in 2018. Other important engagements have included Britten's Billy Budd at the Bolschoi in Moscow,  Masetto at the Nationale Opera Amsterdam and Salzburg Festival and Eugene Onegin and Jeletzki (Pique Dame) in Vilnius. He has also appeared at the Teatro Real in Madrid, Theater Basel, the Concertgebouw in Amsterdam, Royal Albert Hall in London, the BBC Proms and Macerata Opera Festival. This prize winning artist studied at the National Music Academy in Kiev.

Find out more about Iurii Samoilov on his website