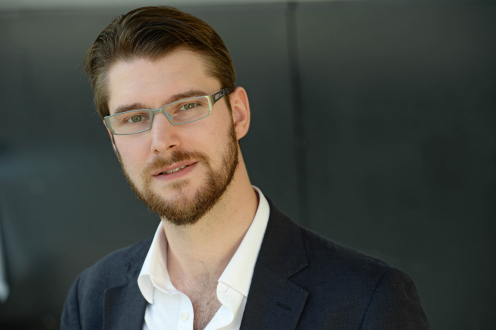 The British bass Thomas Faulkner joined the Ensemble at Oper Frankfurt, where he had been a member of the opera studio, in 2016/17, adding several important roles to his repertoire including John Claggart in Billy Budd, Alidoro in La Cenerentola, Elviro in Xerxes, Lodovico in Verdi's Otello, Don Diego in Meyerbeer's L’Africaine, Zuniga in Carmen and Elmiro in Rossini's Otello. During the 2022/23 season you can hear him as Fritz Kothner in a new production of Die Meistersinger von Nürnberg, Gremin in Eugene Onegin, Dr. Vigelius in our wonderful production of Schreker's  Der ferne Klang / The Distant Sound, Elviro in Xerxes and the Priest / Badger in Das schlaue Füchslein / The Cunning Little Vixen. Guest engagements include Osmin (Die Entführung aus dem Serail) at the Hamburg State Opera and Masetto (Don Giovanni) at Covent Garden in London. Last season he sang Pazjuk, Theseus and Cirillo in new productions of Rimsky-Korsakov's Die Nacht vor Weihnachten / The Night Before Christmas - »Performance of the Year« (Opernwelt magazine 2022), Britten's A Midsummer Night's Dream and Giordano's Fedora, Sparafucile in Rigoletto and Betto di Signa in Gianni Schicchi. Recent guest engagements have included The Watersprite and Fasolt in new productions of Rusalka and Das Rheingold at the Tirol Festival in Erl, his debut at the Theater an der Wien as Swallow (Peter Grimes), Masetto (Don Giovanni) at the Théâtre des Champs-Élysée in Paris, a role he sang at Garsington Opera, performances of Orfeo at the Munich Opera Festival, Banquo (Macbeth) for Scottish Opera on Tour and Messenius (Cristina, regina di Svezia) and Dulcamara (L’elisir dʼamore) at the Wexford Festival. He has also appeared in concert with the Orchestre de Chambre Lausanne, under Bertrand de Billy and the Royal Philharmonic Orchestra. Thomas Faulkner studied at Cambridge University and the Royal Academy of Music London. This British historian's artistic achievements have won him many accolades and a scholarship from the Richard Wagner Verband.