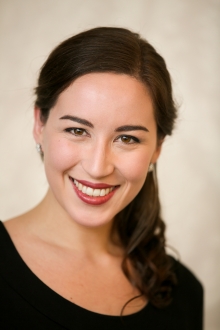 The American soprano Julia Moorman made her debut at Oper Frankfurt singing Papagena in Die Zauberflöte. Since joining the Opera Stuio she has sung 2nd Dryad in Rusalka, 1st Maid in Daphne and Clotilde and Mary in new productions of Norma and Schreker's Der ferne Klang / The Distant Sound. This season she sang in Martinů's Julietta, Krenek's Das geheime Königreich / The Secret Kingdom and a new production of Fauré's Penelope and enjoyed great success as Michaëla in Carmen, but the corona situation put paid to her singing the Cock / Jay in Das schlaue Füchslein / The Cunning Little Vixen.  She studied at the August Everding Theatre Academy / University for Music and Theatre in Munich, the University for Music and Theatre in Hamburg and Amherst College in Massachusetts. Julia Moorman took part in a number of Academy productions, with roles including Tina (Dove's Flight) and Melanto (Ulisse after Monteverdi), at the Prinzregenten Theater in Munich and in Jost's Die arabische Nacht / The Arabian Night in Hamburg. Her repertoire includes the roles of Musetta (La Bohème), Anna (The Seven Deadly Sins) and Poulenc's La voix humaine. She has taken part in masterclasses held by Graham Johnson, Elly Ameling, Brigitte Fassbaender, Hedwig Fassbender, Axel Bauni and Julian Rodesco.