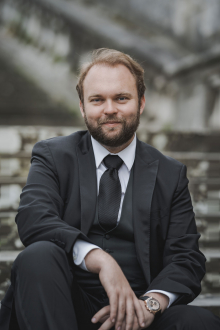 The American tenor Tenor Matthew Swensen joined the ensemble at Oper Frankfurt in 2018/19, making his house debut singing his first Taminos in Die Zauberflöte, which were followed by Almeric / Shepherd in a new Iolanta / Oedipus Rex double bill, Camille de Rosillon in Die lustige Witwe / The Merry Widow, Flavio Norma, Graf Lerma (Don Carlo) and Alberto in a new production of Rossini's La gazzetta. The corona shutdown prevented him from singing Don Ottavio (Don Giovanni), Mastro Trabuco (La forza del destino) and in the world premiere of Lucia Ronchetti's Inferno (commissioned by Oper & Schauspiel Frankfurt) which will now take place in the summer of 2021. During the 2020/21 season he can be heard as Basilio / Don Curzio in Le nozze di Figaro, a Landlord in a new production of Zemlinsky's Der Traumgörge / Görge the Dreamer, Triquet in Eugene Onegin and Dante's inner voice / Lucifero (Inferno). He made his debut at Theater Basel as Aufidio in Mozart's Lucio Silla. Recent events in his busy concert career have included Bach's Christmas Oratorio with the Residenz Chamber Orchestra Munich and Choristers from Augsburg Cathedral (Domsingknaben) and Mozart's Die Schuldigkeit des ersten Gebots / Keeping the First Commandment with the Munich Radio Orchestra under Alessandro De Marchi. This graduate from the Juilliard School in New York sang in Mozart's Requiem in Lincoln Center and Bach's Magnificat in the Carnegie Hall and can be heard as Bill in a recording of Jonathan Dove's Flight. Other places where he has performed in the USA have included Wolftrap Opera, the Opera Theatre of St. Louis, the National Symphony Orchestra and Rochester Philharmonic Orchestra.