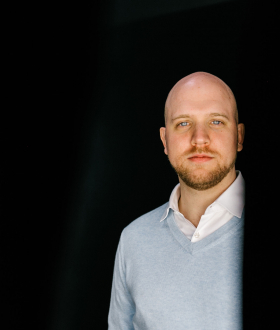 After Eric Jurenas made his European debut singing Natascha in Eötvös’ Tri Sestry (available on CD - OehmsClassics) at the Vienna State Opera in 2016, he quickly became one of the most sought-after countertenors of his generation. Natascha was also his first role at Oper Frankfurt (2018), where he is now back to sing Arsamene in this wonderful production of Xerxes. Recent engagements have taken him to places including the Glimmerglass Festival, Santa Fe and Philadelphia Opera and S. Farrini's La dolce morte for METLiveArts (CD), Handel's Orest at the Chamber Opera in Vienna and Fidi in the world premiere of Dorman's Wahnfried at the Staatstheater in Karlsruhe. He sang Narciso in Barrie Kosky's production of Handel's Agrippina at the Royal Opera House Covent Garden in London, the Staatsoper in Munich and Komische Oper Berlin, where he also sang the title role in Peter Pan, Alexander (Poro) and the Herald in Medea by Reimann, the world premiere of whose Sinnig zwischen beyden Welten was performed in the Pierre Boulez Saal in Berlin by Eric Jurenas with Daniel Barenboim at the piano. He sang Rinaldo at the Theater an der Wien, in Moscow and the Opéra Royal de Versailles, where he also gave a very successful recital. Other concerts have taken him to places including the Festwochen for Early Music in Innsbruck, the Baldwin Bach Festival and he sang David in Saul (available on CD) at the Handel Festival in Göttingen. Future engagements include his debuts at the Nationale Opera Amsterdam and Irish National Opera as Andronico in Vivaldi's Tamerlano, which he will also sing at the Linbury Theatre in London. Eric Jurenas graduated from the renowned Juilliard School, won prizes at many international competitions and received the Thomas Jeffrey Award.