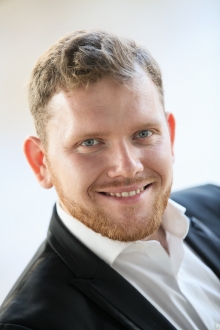 The bass Anatolii Suprun joined the Opera Studio last season, making his house debut as the Steward in Adriana Lecouvreur. During the 2018/19 season his roles include the 2nd Armed Man in Die Zauberflöte, the Herald in Otello and an Army Doctor in La forza del destino and a Policeman in Schreker's Der ferne Klang / The Distant Sound - both new productions. Before coming to Frankfurt he was a member of the National Academy Theatre for Operetta in Kiew, where he sang Basilio in Rossini's Il barbiere di Siviglia and Don Annibale Pistacchio in Donizetti's Il campanello di notte. He studied singing and acting at the Tchaikovsky Music Academy and National University for Theatre, Film and Television in Kiew.