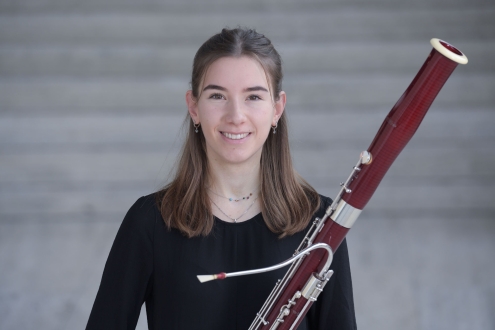 Henrike Kirsch started playing the bassoon when she was at school and received many awards from the Young Musicians' Competition as a soloist and chamber musician at a national level. She also won prizes from the Hamburg Symphony and Philharmonic orchestras and a Trübger Classic Prize. This young musician appeared in her home town of Hamburg with the Hamburg Camerata in the Elb Philharmonie in 2019 and started studying at the University of Music in Detmold with Tobias Pelkner on the basson and Stephan Krings and Gernot Friedrich on the contra-bassoon. While studying for her bachelor she gathered further experience with the Junge Norddeutsche Philharmonie, the Junge Deutsche Philharmonie and Detmold Chamber Orchestra. Henrike Kirsch has just spent a year as a member of the Frankfurt Opern- und Museumsorchester's Paul-Hindemith-Orchester Academy and joined the European Union Youth Orchestra. She joined the Frankfurt Opern- und Museumsorchester in October 2022, playing 2nd bassoon (and contra-bassoon).