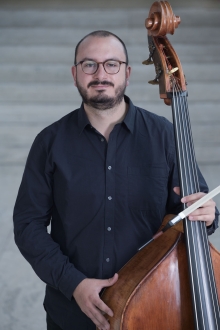 Jon Mikel Martínez Valgañón was born in Fonzaleche, a tiny village in Spain with 98 inhabitants, and grew up in La Rioja. He started playing the double bass at the Music School in Haro when he was six, going to London when he left school to study at the Royal College of Music and then the Robert Schumann Music University in Düsseldorf with Rick Stotijn, where he graduated in 2020 and joined the Gürzenich Orchester in Cologne. Whilst still a student he worked with the Royal Liverpool Philharmonic Orchestra from 2016 - 2018, which was followed by numerous international invitations which have taken Jon Mikel Martínez Valgañón to places including the Lucerne Festival Orchestra, Mahler Chamber Orchestra, Chamber Orchestra of Europe, WDR Sinfonieorchester Köln, Spira Mirabilis and the London Symphony Orchestra. Jon Mikel is also a passionate chamber musician who founded his own ensemble, Vindeleia, in 2018, who aim to bring music to villages in his home region of  La Rioja, a project which won a  DAAD prize for inter-cultural exchange in the year the ensemble came into being.