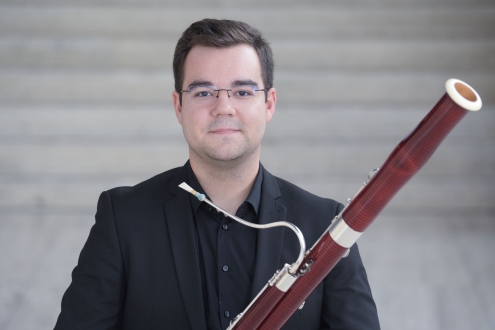 Bassoonist André Rocha was born in Viana do Castelo, Portugal, in 1997 and started music lessons when he was 6.  He took up the bassoon in 2009 with his mentor Pedro Silva at the Alto Minho School for Professional Artists before studying for his bachelor at the University for Music and the Performing Arts in Porto. He then continued his studies in Switzerland, with Carlo Colombo at the Haute École de Musique de Lausanne. He also took part in many masterclasses, being inspired by great players including Giorgio Mandolesi and Marco Postinghel. He won many prizes in Portugal, including 3rd place at the 2021 RTP Prémio Jovens Músicos. He was a member of the Bayerische Staatsorchester's Hermann Levi Academy, the Schleswig-Holstein Festival Orchesters and Swiss Youth Symphony Orchestra. He has also performed with various orchestras including the Orchestre de Chambre de Lausanne, the Sinfonieta de Lausanne and Orquestra Sinfónica do Porto Casa da Música. He joined the Frankfurter Opern- und Museumsorchester in 2022.