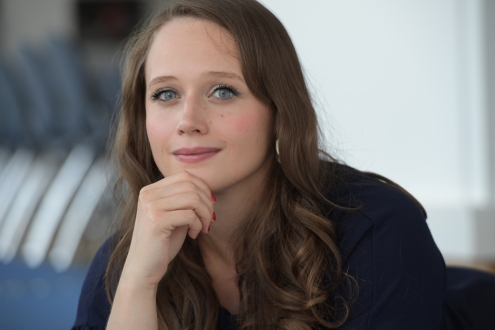 The soprano Anna Nekhames, who comes from Moscow, leaves the Vienna State Opera's Opera Studio to join the Ensemble at Oper Frankfurt in the 2022/23 season. She caused quite a stir when she enjoyed great success with the Queen of the Night in Die Zauberflöte at the Volksoper in Vienna, a role you can hear her singing in a new production in Frankfurt this season, during which she sings the title role in a new production of Mercandate's Francesca da Rimini. She sang the Early Bird in the first performances in Austria of Detlev Glanert's Leyla und Medjnun in Vienna. Other roles at the Vienna State Opera last season included Juliette (Die tote Stadt / The Dead City), Mascha and Chloe (Pique Dame), 2nd Flower Maiden (Parsifal), Konstanze (Entführung ins Zauberreich) and a Couturier(Der Rosenkavalier) . She started her career in the children's chorus at the Bolschoi in Moscow before studying singing with Liudmila Lazatschik-Tratzewskaja  at the „Galina Wischnevskaja“ College for Music and Theatre and then Svetlana Gorenkova at the Gnessin Music Academy in Moscow, where roles included Musetta (La Bohème) and Madame Herz (Der Schauspieldirektor) . In 2018 she joined the city of Vienna's Music and the Arts private university for her masters, where she studied with KS Elena Filipova and KS Birgid Steinberger. Anna Nekhames has won many prizes, including the 11th International Hilde Zadek Competition (2019) and 3rd International Haydn Competition(2021). Her repertoire in includes Olympia (Les contes d’Hoffmann), Giannetta (L’elisir d’amore), Voce dal cielo (Don Carlo), Gilda (Rigoletto), Xenia (Boris Godunow), Adele (Die Fledermaus), 1st Dryad (Rusalka), An Italian Singer (Capriccio) and Fiakermilli (Arabella).