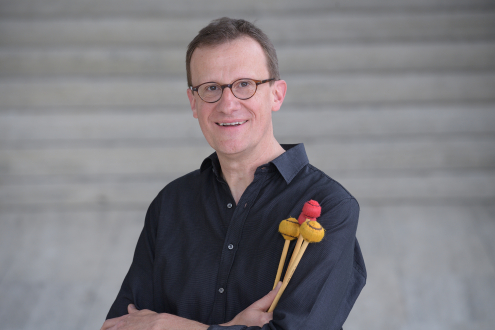 Born in Konstanz in 1963, Jürgen Friedel spent his childhood and youth in the Hilpertsau, Baden / Nordschwarzwald. After obligatory piano lessons he was given percussion lessons for his 15th birthday. He began learnnig with his father Horst Friedel – whose enthusiam, curiosity and openess still accompany him today - later with Prof. Franz Lang. Both were percussionists with the former SWF Sinfonieorchester and strongly influenced his artistic career. His first experiences as a musician were gained in the Youth Orchestra of Hilpertsau Music Club and a rock band. He studied at the University for Music in Trossingen with Prof. Hermann Gschwendtner from 1983 - 1987, the year he joined the Frankfurt Opern-und Museumsorchester.