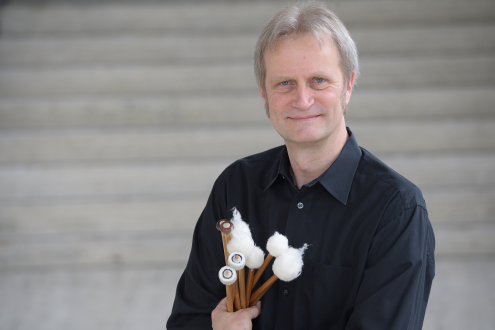 Tobias Kästle was born in Munich in 1968 and started playing percussion in bands when he was at school. He studied percussion and composition in Munich, Hannover and Berlin from 1988 – 1995 and got his first job as a solo timpanist at the Pfalztheater in Kaiserslautern in 1995, a position took up at the Frankfurt Opern- und Museumsorchester in 1998. He works with all sorts of chamber music ensembles, often performing his own works. As a composer what's important to him is working with different forms of opera and dance, which has brought him commissions from theatres and festivals at home and abroad. His Die vier Himmelsrichtungen / The four points of the compass won the 1994 BMW Musiktheaterpreis at the Munich Biennale. He has also written chamber music, works for choirs, opera and radio plays. He taught at the University for Muisc and the Performing Arts in Frankfurt from 2005 - 2015.