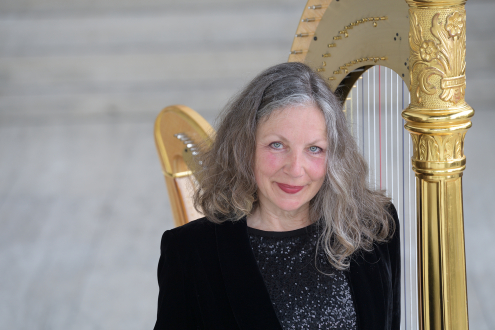 Barbara Mayr-Winkler's first harp lesson was with Ragnhild Kopp-Mues in Munich. In 1982 she was awarded a scholarship by the Bavarian Music Council, the year she began studying with Prof. Gisèle Herbét at the University for Music in Würzburg, graduating with distinction. In 1986 she was engaged to teach at the University for Music in Würzburg and took part in courses run by Prof. Pierre Jamet at the Académie Internationale de Harpe in Gargilesse in 1985, 1986 & 1988. In 1986 the German Music Council included her in the 30th selection of young artists nationwide, linked to a tour of 50 concerts throughout Germany. A year later she was awarded Bavaria's prize for young artists. This resulted in television and radio recordings and lots of concerts. She joined the Frankfurt Opern- und Museumsorchester in 1993 and has been a member of the Bayreuth Festival Orchestra since 1999, where highlights have included Beckmesser's famous scene in Wagner's Die Meistersinger von Nürnberg.