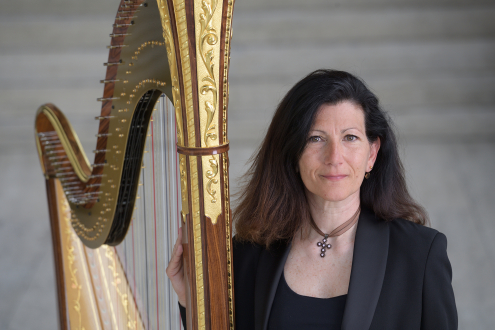 Françoise Verherve began learning to play the harp in Marseille, her home town. She then went to Professor Gérard Devos at the Conservatoire National Superieur de Musique in Paris in 1982, where she graduated with distinction before studying further with Jacqueline Borot. Françoise Verherve won 1st Prize at the 1987 International Harp Competition M. A. Casala in Gargilesse, France, and two special prizes for interpretating works by Maurice Ravel and Yoshihisa Taira. She has played solo harp with the Frankfurt Opern- und Museumsorchester since 1990 and is a regular guest with orchestras including the Orchestre de Paris and the Berlin Philharmonic. Solo concerts have taken her to places including France, Spain, Egypt, Switzerland and Turkey. Françoise Verherve teaches at the University for Music and the Performing Arts in Frankfurt and holds masterclasses in Germany, France, Spain and Italy.