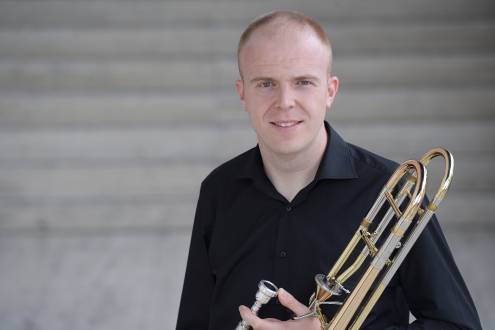 Miguel García Casas, born in Les Coves de V., Spain, in 1994, started studying music at the university in his home town with Israel Salvador and Conservatorios de Benicarló und Castellón with Félix García. He also attended masterclasses including one held by Aula de Trombón Stomvi with Carlos Gil and Inda Bonet. Miguel García Casas gained his Bachelors, with distinction, at the Real Conservatorio Superior de Música de Madrid with Prof. Elies Hernandis. He went to the University for the Arts in Bern to develop performing classical music even further with Prof. Ian Bousfield. He was helped in this by support from the Dávalos-Fletcher-, BBVA/JONDE-, LYRA-, Geer and Lore Blanken Schlemper and Rita Zimmermann foundation. Miguel García Casas took part in all sorts of youth projects and joined academies affiliated to several Spanish orchestras and in Switzerland. His passion for chamber music inspired him to co-found the Nineties Trombone ensemble and And the Brass. He has been a solo trombonist at the Frankfurt Opern- und Museumsorchester since 2018. He also enjoys playing with colleagues in Frankfurt Chamber Brass