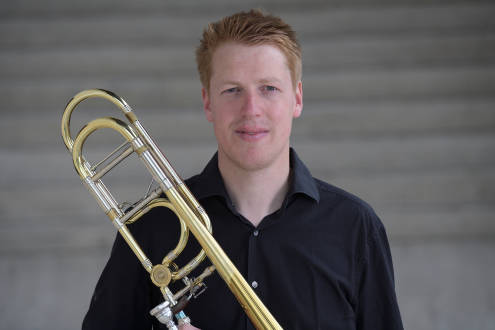 The trombonist Jeroen Mentens, who was born in Belgium in 1982, won prizes at the International Competition for easy listening music in St. Gallen and Concours Européen de l’UGDA for Trombone, Euphonium and Singing in Luxemburg. He was a finalist at the Robert Martseller Competition in New Orleans. He studied in Amsterdam and New York, at the Juilliard School with star trombone virtuoso Joseph Alessi, and was a member of the European Union Youth Orchestra and Lucerne Festival Academy. Jeroen Mentens is often asked to step in for other leading orchestras, such as the Concertgebouw Amsterdam, the WDR Sinfonieorchester, hr(Hessen Radio)-Sinfonieorchester and Bamberg Symphony. He has worked under conductors including Bernard Haitink, Mariss Jansons and Pierre Boulez. He played with the Brussels and Essen philharmonics before joining the Frankfurt Opern- und Museumsorchester in 2010 as a solo trombone. This passionate chamber musician is co-founder of the Bone Society ensemble. He also teaches and has held masterclasses in Japan, Italy and Luxembourg. He has taught the trombone at Dr. Hoch’s Konservatorium Frankfurt am Main since 2015.