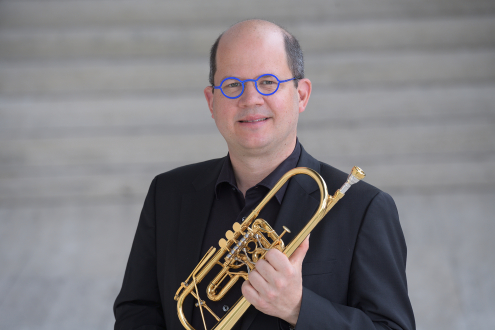 Markus Bebek was born in Nürnberg. He found his musical roots working with Bavarian trombone choirs. He graduated in orchestral studies with Prof. Günther Beetz at the University for Music in Mannheim. His was appointed deputy solo trumpet with the Philharmonic Orchester in Trier in 2001 before taking up the same position with the Frankfurt Opern- und Museumsorchester in 2005. Markus Bebek has worked with other leading orchestras including the NDR Elbphilharmonie Orchester, the hr(Hessen Radio)-Sinfonieorchester, Deutsche Sinfonie-Orchester Berlin and Oslo Philharmonic Orchestra. He is passionate about chamber music and works for trumpet and organ. He has appeared with various ensembles and as a soloist at leading festivals and concert series, including the Frankfurt Dom(cathedral)Concerts, the Mozartfest in Würzburg, Beethovenfest in Bonn and the Kissinger Summer Festival. Markus Bebek and his family live in the Wetterau, Hessen.