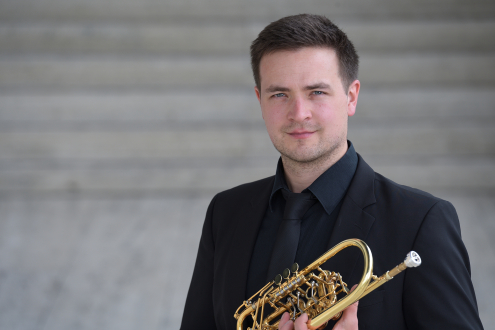 Matthias Kowalczyk, born in Bochum in 1988, had his first trumpet lesson when he was six and was studying at the Robert Schumann Hochschule in Düsseldorf by the time he was 15. In 2006 he went to study with Prof. Klaus Schuhwerk at the University for Music and the Performing Arts in Frankfurt. He was engaged as a solo trumpet with the Frankfurt Opern- und Museumsorchester in 2010. He is a regular guest with other leading orchestras including the Berlin Philharmonic, the Bayerische Staatsorchester, the NDR Elb Philharmonie Orchester, Deutsche Sinfonie Orchester Berlin, the WDR Sinfonieorchester Cologne and the hr(Hessen Radio)-Sinfonieorchester. He has been a member of the Bayreuth Festival Orchestra since 2019. Solo work has taken him to orchestras including the Radio Orchestra in Munich, the Frankfurt Opern- und Museumsorchester and Philharmonic Staatsorchester in Mainz. He also devotes time teaching at the Universities in Mainz and Basel and the Music Academy in Wiesbaden.