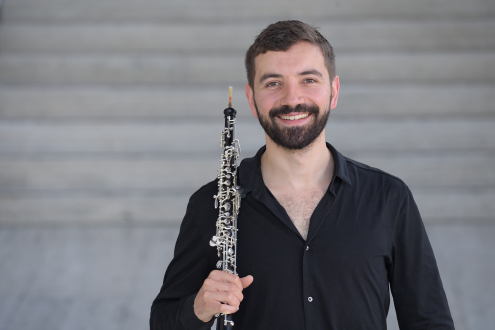 Johannes Grosso has been a solo oboist with the Frankfurt Opern-und Museumsorchester since 2015, after spending four years as deputy solo oboist with the Orchestre Philharmonique de Radio-France. He also plays with the Budapest Festival Orchestra. Johannes Grosso won 1st Prize at the Prague Spring in May 2014, and various other prizes at a number of international competitions. This success enabled him to appear as a soloist with famous conductors including Christoph von Dohnányi and Daniele Gatti, and orchestras including the Czech Radio Orchestra, Prague Chamber Orchestra, the Schleswig-Holstein Music Festival Orchestra and New Bach Collegium. He appears regularly with great European orchestras such as the Chamber Orchestra of Europe, the Gewandhaus Orchester Leipzig, hr(Hessen Radio)-Sinfonieorchester, Bamberg Symphony and the Bayerische Staatsorchester. He was invited to play with the Bayreuth Festival Orchestra in the summer of 2017. He holds regular masterclasses and teaches at various music academies. He became a professor at the Norwegian Music Academy in Oslo in 2018.