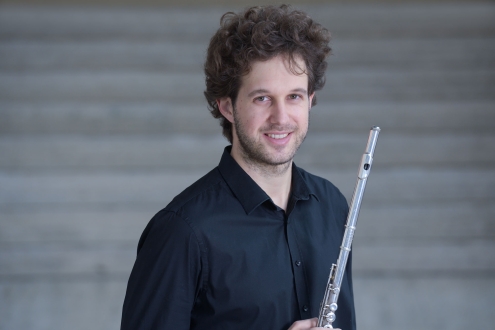 Eduard Belmar, born in Palma de Mallorca, had his first flute lesson at the Conservatoire there with Catalina Roig before going to study with Vicens Prats at the Escola Superior de Musica de Catalunya in Barcelona in 2010. In 2011 he joined the Conservatoire National Supérieur de Musique et de Danse de Paris, where he was taught by Sophie Cherrier and Vincent Lucas, gaining his Bachelor in 2013 with distinction. He studied for his masters at the University of Music in Stuttgart with Prof. Davide Formisano. He has been awarded several international prizes, including 3rd prize at the 2015 International ARD Music Competition. Eduard Belmar has helped out with orchestras including the Gewandhaus Orchester Leipzig, the Deutsche Oper Berlin's orchestra, the SWR Sinfonieorchester, hr(Hessen Radio)-Sinfonieorchester Frankfurt, the Munich Philharmonic and WDR Sinfonieorchester. He was solo flautist at the Staatskapelle in Karlsruhe from 2014 – 2017 and has held the same position at the Frankfurt Opern- und Museumsorchester since the 2017/18 season. He has been teaching at the Univerisity for Music and the Performing Arts in Frankfurt since 2020.