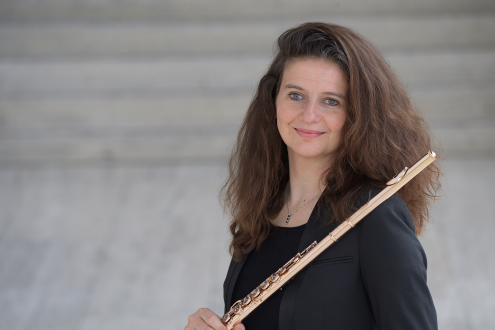 Sarah Louvion was born in the north of France and studied the flute and chamber music at the Conservatoire National de Musique de Paris, after studying mathematics and physics at university. She has won many international competitions, including 1st prize at the International Flute Competition in Kobe and 3rd prize at the International Competition in Geneva. She was awarded the 2011 Pro Musicis in Paris. She has been 1st flute with the Frankfurt Opern-und Museumsorchester since 2002. She is also sought-after worldwide for solo work, chamber music and as a teacher. Her CD (FARAO Classics) is dedicated to French music and was highly praised by the press. She holds masterclasses all over the world and was invited to be a guest professor at the Geidai University for the Arts in Japan in 2016. She has also taught at the University for Music and the Performing Arts in Frankfurt. She is busy all over the world as an engaged and sought-after musician and loves nothing better than sharing her passion for music and culture with other musicians.