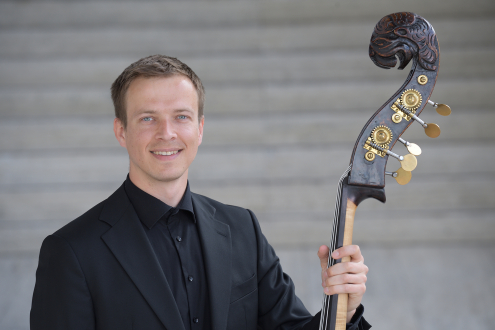 The Luxemburger double bass player Jean Hommel played in all sorts of bands, from jazz to punk, when he was young. After leaving school he went to study the electric bass in Amsterdam, where concerts he went to drew him, almost over night, into the world of classical music and to the double bass. Jean Hommel began studying for his Bachelor degree with Carol Harte in Maastricht, then Prof. Božo Paradžik in Freiburg, where he obtained it in 2013. He joined the Bayerische Staatsoper's academy not long afterwards, and then played with the Orchestre Philharmonique du Luxembourg. Jean Hommel joined the Frankfurt Opern- und Museumsorchester in December 2016. He plays in other great orchestras too, including the Munich Philharmonic, the Bavarian Radio Symphony Orchestra, the Staatsorchester in Stuttgart, Orchestre Philharmonique du Luxembourg, the Ensemble Modern and Bayerische Staatsorchester, as well as with his band, The Disliked, for which he also composes. Jean Hommel gained his masters, concentrating on mediation, in 2021 with Prof. Rick Stotijn in Düsseldorf.