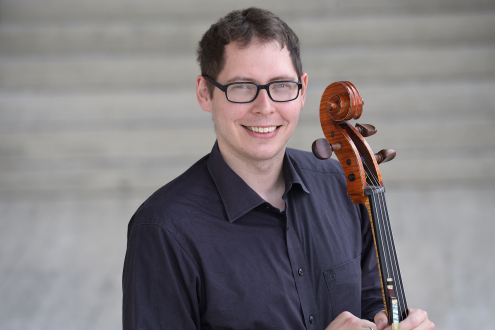 Mario Riemer, born in Bonn in 1988, and had his first cello lesson when he was five. After being taught by Prof. Claus Reichardt at the Robert Schumann University in Düsseldorf he went to Frankfurt am Main to study with Prof. Michael Sanderling in 2007, passing his finals with flying colours in 2014, and his concert exams, with the help of Michael Sanderling, in 2016. Mario Riemer has won many prizes including the Henri Hermans Concours in Maastricht, the Antonio Janigro Competition in Croatia and the German University Competition. He received scholarships from the German People's Foundation, the Peter Pirazzi Foundation and Villa Musica Rheinland-Pfalz Foundation. After temporary contracts with the Dresden Philharmonic and Bayerische Staatsoper in Munich Mario Riemer joined the Frankfurt Opern- und Museumsorchester in 2014. He is a member of the Mahagonny Cello Quartet, Oper Frankfurt's cello quartet.