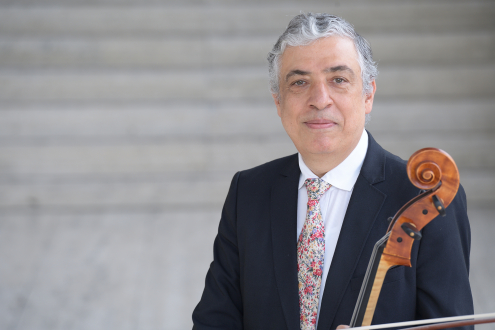 Kaamel Salaheldin was born in Cairo to a musical family. He started taking cello lessons at the age of nine at the Conservatoire in Cairo with professors Issakadze and Abdullaev, graduating in 1979 with distinction. He later worked there as a professor too. He continued his studies in Frankfurt am Main in 1981, received a DAAD scholarship in 1982 and took his final exams in 1983 and 1986. He joined the Johannesen International School of Arts in Canada from 1982-1985, where he also assisted Harvey Shapiro. He has been a member of the Frankfurt Opern- und Museumsorchester since 1988. Since 2000 he has worked regularly and closely with conductors including Rinaldo Alessandrini, Ivor Bolton, Constantinos Carydis, Christian Curnin, Thomas Hengelbrock and Andrea Marcon on baroque operas and is a member of the Balthasar Neumann Ensemble. He has been part of the school project Ohrwurm (tunes you just can't get out of your brain) since 2001. He founded the Horus Ensemble with is wife Basma Abdel-Rahim in 2002, which perform on historical instruments and perform all over the world. In 2014 he started an initiative to encourage young Egyptian talent to take up a musical instrument through workshops, courses and concerts. He is sought-after for solo work and is a member of a group of chamber musicians working in radio and television recordings in Europe, the near East and the USA, which have included broadcasts of world premieres of works written by his father-in-law Gamal Abdel-Rahim.