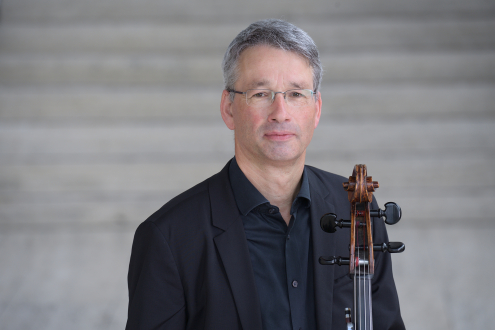 Johannes Oesterlee was born in Lüdenscheid in 1964 and studied the cello with Gerhard Mantel in Frankfurt am Main and Uzi Wiesel in Tel Aviv. He also took part in many masterclasses held by people including Boris Pergamenschikov, Sándor Devich, György Kurtág, the Amadeus and Julliard string quartets. After winnning several prizes at Jugend musiert he won the Rubin Academy of Music Prize in Tel Aviv and Lion Alkelei Competition. These led to a series of concerts throughout Israel with the Young Israel Philharmonic Orchestra. Osterlee has performed in Paris, London, Manchester, Madrid and New York as a member of the H. Gertler String Quartet. Solo work has taken him to orchestras including the Siegerland Orchester, the Jeunesses Musicales NRW chamber orchestra, the University of Bonn's Collegium Musicum, the Stamitz Orchester in Mannheim, Frankfurt Solists and the Radio Philharmonie in Posen. He was invited to take part in two gala concerts in Maastricht to celebrate Andrea Amati's 500th birthday and is a founding member of the Mahagonny Cello Quartet and Oper Frankfurt's Cello Quartet.