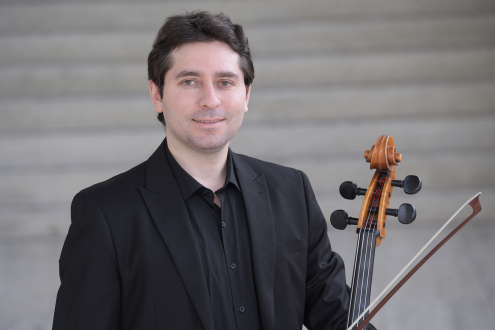 Mikhail Nemtsov grew up in St. Petersburg and went to Chetham’s School of Music and the Royal Northern College of Music in Manchester after studying at the Rimsky-Korsakow music school. His wonderful professors included Nicholas Jones, Hannah Roberts, Ralph Kirshbaum and Gary Hoffman. Mikhail Nemtsov has appeared as a soloist all over the world. Recent highlights have included concerts with the Mozarteum Orchester Salzburg, the Philharmonia Orchestra London, the Porto Symphony Orchestra, the European Union Chamber Orchestra, Manchester Camerata and the London Festival Orchestra. His achievements won him the Pierre Fournier Award, a Gold Medal from the Royal Northern College of Music and Silver Medal from the Rostropovich Memorial Competition. He and his sister are the Nemtsov Duo, who have recently released a CD on Azurro Records and a later one by CMF. Mikhail Nemtsov teaches at the Birmingham Conservatoire and Royal Northern College of Music, where he is an Associate Honorary Artist. He has been a solo cellist with the Frankfurt Opern- und Museumsorchester since August 2019.