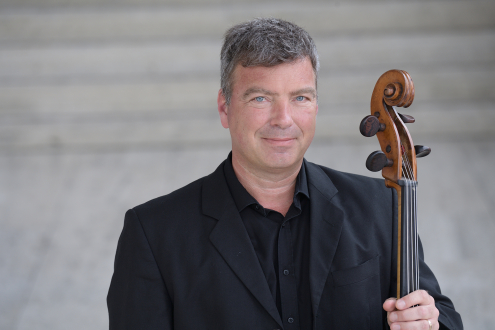 Rüdiger Clauß was born in Ludwigshafen in 1968. He began playing the piano when he was six, had his first cello lesson when he was 10, and then added the saxophone. The cello quickly became his main love. Success at the Jugend musizert Competition motivated him further. His teacher was Gisela Reith, a cellist with the Pfälzische Philharmonie. In 1989 he started having lessons with Prof. Wolfgang Boettcher at the University for Arts in Berlin. He won a place at the Berlin Philharmonic Orchestra's Academy (Karajan Foundation) in 1992, where he was taught by Jörg Baumann. He was appointed solo cellist at the Royal Philharmonic Orchestra in Flanders (Antwerpen) in 1994 and, two years later, the same position with the Frankfurt Opern- und Museumsorchester, where he is to this day. He is also sought-after for solo and chamber music work and composes – some of his works (including a cello concerto) have been published by Hauke Hack publishers. He plays on a Martin Diehl cello (c. 1770, Darmstadt).