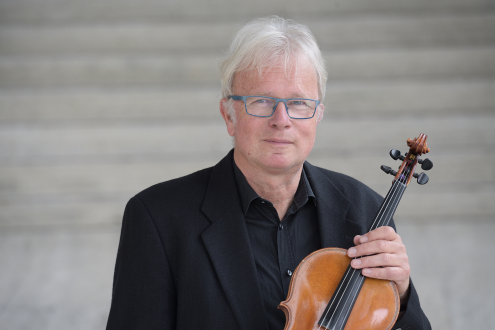 Ludwig Hampe grew up in a musical family in Munich. After studying the history of art and archeology he started learning to play the viola, almost by chance, with Ulrich Koch in 1980. He was later inspired by the violinist Rainer Kussmaul and the Amadeus Quartet. He has been deputy leader of the violas in Frankfurt Opern- und Museumsorchester since 1985. Unforgettable operatic highlights for him over the years included the Ring under Michael Gielen, Mozart operas wih Sylvain Cambreling, Verdi under Paolo Carignani, Strauss with Sebastian Weigle and the conductors Carlo Franci, Kirill Petrenko and Constantinos Carydis. The Viola d’amore is more than a hobby for Ludwig Hampe: he has played it at the Salzburg Festival, the Rheingau and Herrenchiemsee festivals and the baroque viola with the Freiburg Baroque Orchestra, Mainz Bach Orchester and Horus Ensemble. He always loved going on tour with big orchestras and his viola. Ludwig Hampe was a member of the Frankfurt Opern- und Museumsorchester's committee for 12 years. Experience gathered during years spent running the Engelthaler Sommer Serenade concerts now pay off, as he chairs the Walter Witte Viola Foundation.